The lovely and talented Sinn Sage is back! She of the disarming smile, sweet personality and absolutely kick ass little body returns for her third Academy visit, this time to face off with the legendary Isamar in an epic battle sure to be favorite. In addition to being in great shape, Sinn has done a fair amount of pro style videos, as well as more hardcore type wrestling videos. She's also a fan of MMA and brings a decent knowledge of basic submission holds, as we learned from her previous matches here. What's left to say about the voluptuous Latina Isamar that hasn't already been said? Sultry, sexy, and downright tough, Isamar may be slowing down, but there are still few here that can beat her. Though not as fit as her foe today, Isamar has the edge in both size and experience, and plans on putting yet another newbie in her place before claiming her prize.
Isamar Gutierrez 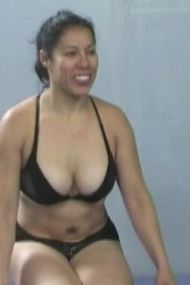 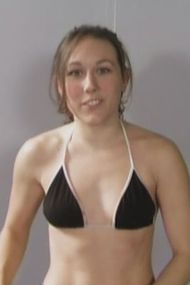 Anyone assuming a typical Isamar beatdown better guess again. Though the longtime veteran starts off on top in an attempt to literally squash the fight out of her younger opponent, Sinn 's quickness and cardio counteract Isamar's strength advantage. Before long multiple tap outs are scored by BOTH las (keep in mind, the lithe Sinn scored a sub over Ariel X in her debut match). Armbars, wristlocks, and checkholds are used to score submissions, with sweet kisses being exchanged throughout this energetic and surprisingly close match. The end comes via a brutal armlock that draws a scream from the vanquished competitor, leaving no doubt who is top cat on this day. And if that's not enough, the winner breakes out the strap on, and drives it home long, hard, and from every angle on her panting and now completely defeated foe. Sexy and competitive, right down to a very conclusive hardcore ending, the Academy way.
Isamar Gutierrez