Blonde bully Hannah brings her cocky arrogance and vast experience advantage to the Academy mats once again to have it out with Angella Artis. Angella, with long dark hair and piercingly dark eyes, really enjoys the competition and struggle, but never showed the fire to dominate the way Hannah does.

Things change for Angella today! Hannah is able to throw Angella down and squash her face to the mat with neck cranks due to a quickness born of experience. 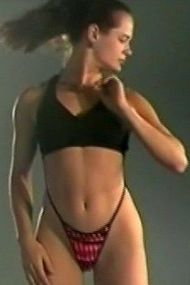 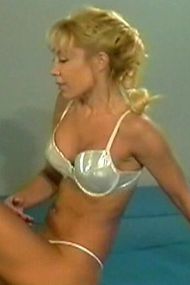 see all series ACA-140 downloads
Nearly an hour of all out topless wrestling!

Angella seems helpless in the taller, stronger blonde's embrace, but that "I'm gonna kick your ass and sit on your face" attitude that has cowed so many of Hannah's opponent's simply doesn't work with Angella. Although her facial expression never changes, Angella shows a smoldering intensity that is rare at the Academy.

Angella eventually gets Hannah in a body scissors and just won't let go, even when Hannah lifts both she and Angella upright and slams all her weight down on the brunette -who still won't let go! The question is -can Angella maintain her intensity or will Hannah, like most common bullies, wilt when her victim doesn't cooperate and just let her win.